My photo of Chef Alex Boonphaya is on the cover of Philadelphia Weekly! Chef Alex is a very busy person. When I arrived at his restaurant he was in a business meeting and he had a very limited amount of time to shoot. He was very accommodating to me in the time we had, and I am very grateful that he was able to carve time out of his schedule to pose for me.

One of the cool things about taking photos for Philadelphia Weekly is the opportunity to meet people like Chef Alex Boonphaya. It’s a real privilege to have an excuse to meet people like this. I don’t make much money these days, but I live like a rich person, because I get to talk to the most amazing people, doing the most incredible things. 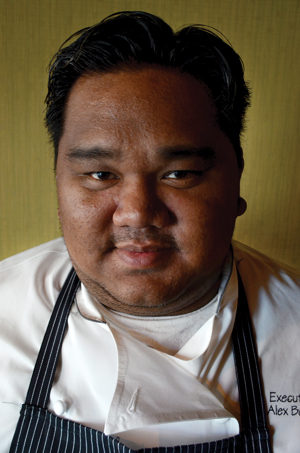 In Thailand, there is less distance between the flesh you purchase and the animal it once was than anywhere I’ve ever seen. As I walked through the Klong Toey street market in Bangkok alongside Alex Boonphaya, the chef who owns Philadelphia’s Thai restaurant Circles, we saw entire baskets of kidneys and livers glistening in the afternoon heat. Wooden rods hung with entrails—some still attached to neighboring organs, some divvied up into sections of lungs, trachea, intestines—looked like some kind of horror-movie design decision, a fleshy curtain hung against the intruding light outside a haunted castle.