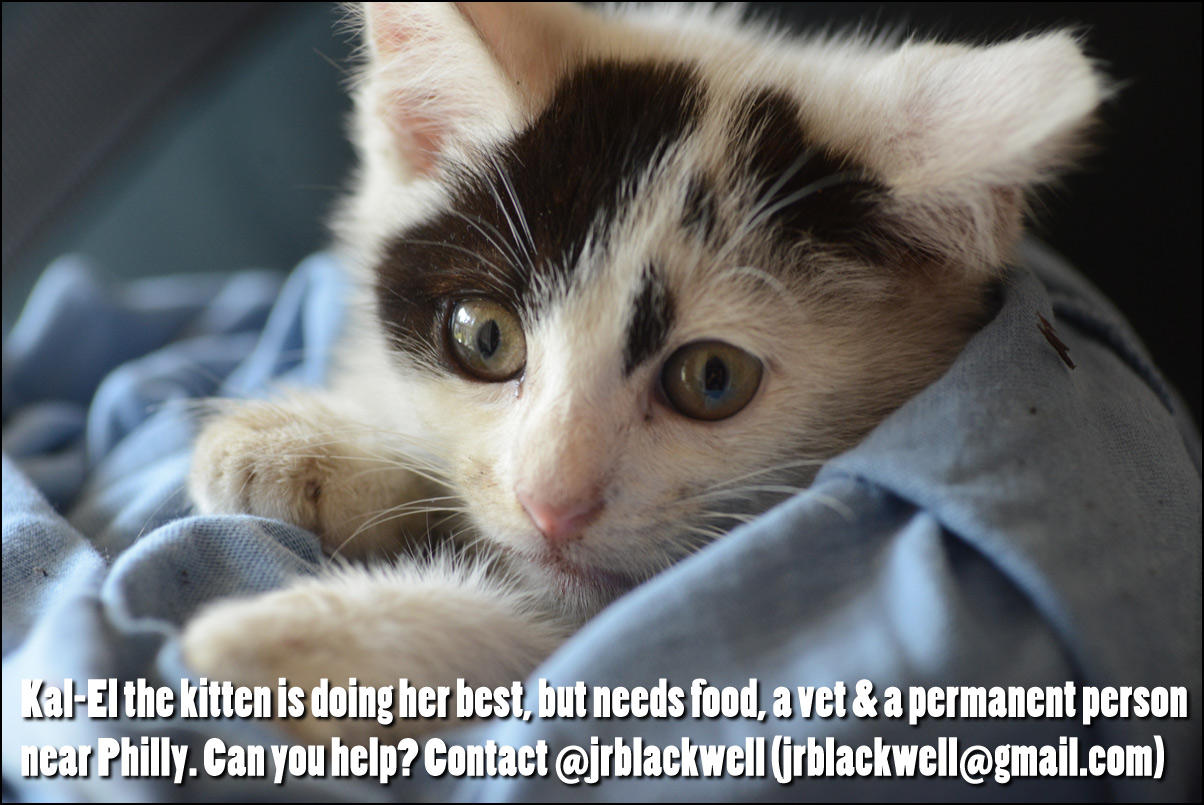 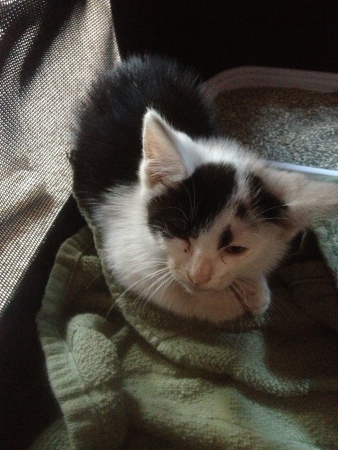 Kal-El in a cat carrier, just an hour after I caught him.

I was driving home last Monday when a kitten dashed out on the road. The car in front of me swerved not to hit him, and without really thinking about it, I pulled over and jumped out of my car.

I was on 40th and Market, right next to the bus stop. It took four kind pedestrians and a t-shirt to catch the little guy, who fought until he was wrapped up in the t-shirt. Then he got so calm that I worried we had hurt him, but when I peeled back the fabric, two little green eyes stared out at me calmly.

He had dirty little paws and wild eyes, and was small enough to fit in one of my hands.  I had no idea what to do next. I had caught a stray kitten – now what?

I called my friend Kyle and said “I need your help.”

Without asking what I needed he said “I’ll do it!”

I told Kyle about the cat, and invited myself over. I held the kitten on my lap in the t-shirt and hoped that he wouldn’t dash out and around the car. I told him that if he could make this ride without freaking out, I promised to find him a forever home.

Kyle gave me some litter, a cat carrier, ten dollars (for food) and took an amazing photo of the kitten’s little face. “He needs a superhero name,” said Kyle.

Kal-El, for those you don’t know, is Superman’s Kryptonian name, his birth name given to him by parents who knew they couldn’t keep him. For Kal-El to thrive, they had to send him away. First, of course, they had to find a ship to send him off in (thanks for the cat-carrier Kyle!) and good place to send him to. 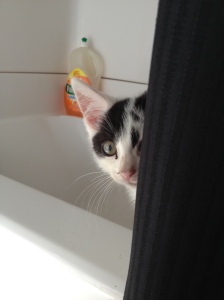 Kal-El at Jenn’s house, peeking from behind a shower-curtain.

Kal-El ate ravenously. I took him over to my friend Jennifer’s house. He mewed in tiny, almost silent, ways as we bathed and towel-dried him.  Then I got a message from someo

ne who was moving to the area and wanted to be Kal-El’s forever family.

Jennifer kept Kal-El for a week while his forever family got ready for him. He saw a vet, who helped clean up all the little bugs he had picked up on the street, and after a week Kal-El was bigger, cleaner, and far more cuddly and playful. He likes to attack (and cuddle) a plush Frankenstein, play with a orange ball and bat around a little fabric mouse. He eats a lot and is turning into a little fluffball.

Today he meets his forever family for the first time. He will be going to a new place, and maybe even getting a new name (the great thing about Kal-El is that it’s totally cool for him to have a new, earth-name).

It’s sad to part with him, but it’s wonderful to know that he is going to a good home where he will bring people a lot of joy and silliness.

NOTE: A few people have expressed interest in donating to Kal-El’s care. Thank you so much! Right now his needs are few and taken care of. However! If there were any medical issues that were beyond our means, we would have turned to City Kitties, a non-profit that helps care for stray cats in West Philadelphia. If you think that you would like to help Kal-El or cats like him, consider making a donation to them, as they are the organization we would have turned to for help, if we had needed it.

**First photo on this post was taken by photographer and friend-to-cats, Kyle Cassidy

2 thoughts on “Kal-El the Kitten”